Zelda had 6 puppies they are the ones I took pictures of a while back she was one of them.

Our granddaughter Sophia named her when she was little I told her I will keep the name but add to it.

We are coowning her with our daughter Jeanelle. She kept the other female pup Hippo and we have this one. I think the two females were the ones in the box by themselves in the last photo session.

She’s a little bit insecure being away from her littermates. Potty training is an A+ and she goes in the kennel with no problems at night.

We have had her 3 days and Daisy and Zoee are tolerating her at this point but getting along okay. She has tried to nurse from both of them and they have told her NO! She is an ankle biter and I am trying to break that habit quickly.

I told Zoee in a month she will be bigger than her. These dogs grow so fast it’s unreal.

Zelda’s pups are sold but Raven’s pups there were 11 and shes taking deposits on them now. There were quite a few solid grey/ blue ones.

I have not had a chance to do pictures of Raven’s bunch due to this quarantine but I can assure you they are beautiful pups. She has been taking pics and putting them on her Facebook page.

You can find her pups here on WordPress:  https://shadyacresrosharon.wordpress.com/

All these pups are raised with four kids running and playing with them all the time. They are also raised around other dogs.

Have a great weekend and do something you enjoy. Our two boxers dogs love to run, play and wrestle together.

They get into these kissing sessions that are normally initiated by Miss Zoee she loves her Miss Daisy girl.

I wanted to do their pics together so I raked up the cypress tree leaves into a large pile and this was their idea of a photo session. This is my sister Sheri’s and her husbands David two new Sheltie pups they are 4-month-old siblings.

The brown one Missy Hogan is the female and the black and grey one Turbo is the male he has one blue eye.

Trying to keep two very active pups still for pictures was quite the challenge but my sister and I were able to pull it off.

Next time we will try to add in the cat now that should be exciting.

These Cane Corso puppies are 8 weeks old and going to their new homes this weekend.

Everytime I would get focused one pup would go overboard. I had the grandkids putting them back in the wagon and moving quickly so I could take a few pics. 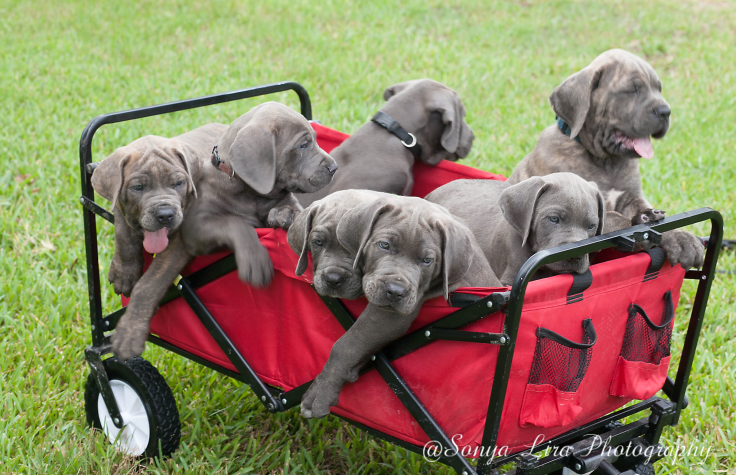 I was in the front yard with the grandkids, Jeanelle and their new Cane Corso puppy.

The pup had just had its ears cut so they are super tender and we were trying to do some pics but Mako ( the pup)  was not cooperating.

We went to the side yard in the front for fewer distractions and low and behold Daisy and Zoee were in the backyard and they did this pitiful pose at the gate.

These two are always trying to be the center of everyone’s attention.

Our Daisy girl is six years old and she still acts like a puppy on most days.

I never knew a dog could have so much personality.

She talks to us and can get quite sassy sometimes.

She loves to sleep at the foot of our bed covered up everywhere but her head. That does not mean that if she gets cold in the night she will not get between us lol.

When I am gone somewhere and get back home she expects something special & now she has taught Zoee this trick. I keep a bag of special treats for those occasions. They get dog biscuits on a daily basis so those do not count lol.

Daisy has brought so much joy to our lives I have no idea what we would have done without her. I am glad she and Zoee have each other because she’s a good sister mama & Zoee is a great companion for her.

I will try and get some more pics this week she was not being very cooperative yesterday.

This picture is her waiting for Zoee to come outside and join her. That anticipation look.

Our two boxers Daisy and Zoee both seem to love the water hose.

Zoee will not back off and scares me she’s going to choke on the water so she has to be monitored.

Daisy runs and gets it and then runs off.

They had a good time on Sunday once our Texas warm weather kicked back in.

This all started because I was trying to water plants and flowers. Zoee thinks that is her time and she got Daisy involved in her water hose game.

Dogs just wanna have fun & have a little playtime.

The ladybug and the Asian beetle look very much alike but there are some differences.

Ladybugs have a red color and a black head. The Asian beetles are more orangish red and have a white face.

If your home has been invaded by what you think could be a ladybugs chances are its actually the Asian beetles.

These beetles will bury inside of the roof of a dogs mouth. There was an article posted in December in the Houston Chronicle about this. I will enclose the link.

Asian Beetles in a dogs mouth

I took these pictures on Wednesday with my macro lens so they are still hanging around.

Look for the white head then you will know it is them. Some people say these beetles bite so beware.

Never let your eyes fool you what you think is a cute ladybug might be the evil twin in disguise.