Hurricane Laura was pounding down and increasing as it etched closer and closer to the Texas/ Louisiana coast.

I hate to see these storms hit anyone but I am grateful we did not see the brunt of this one. It hit about 160 miles east of Houston, Texas.

As of 6 a.m. we have not even gotten a drop of rain but we could use a few inches because lately we have been dry as a bone.

I am sure our family, friends and neighbors in Louisiana will see some heavy rains and winds out of this and hopefully not a lot of damage.

Our son and the company he works for will be some of many workers out there getting the power back on. Rest assured you are in good hands.

Please say a prayer to keep everyone safe these workers risk their lives everyday.

Texas it might be time to ask yourself ” Do you need to cry”?

If you live near the Texas Gulf Coast take a deep breath and relax and do something fun today.

This little squirrel has been trying to figure out how to get into my bird feeder.

This is one of my concrete leaf bird feeders and it is attached with brass chain. Finally he decided to climb down the chain and there he sat waiting for me to get his picture while enjoying some bird seed.

Life is good nature is great each day offers something new and exciting to see. Take the time to notice what is right in front of you.

Mr. Bird loves to climb trees but if hes showing off and running fast he climbs higher than he intended to do.

Its always easier to go up than down but he sure does like the view from up there.

Our oldest son Joshua was a very big fan of Nolan Ryan who was the former pitcher for the Houston Astros and the Texas Rangers.

Anything Nolan Ryan was quite popular with the young boys because these were Texas teams he played for.

Nolan Ryan lived in Alvin, Texas 15 minutes from where we lived and he went to Alvin HS and graduated in 1965.

Joshua collected his baseball cards and it was the ultimate challenge to find the right card or buy the right card at a card shop. He even traded cards with a few friends of his.

Many of these cards were in clear sleeves I took them out to show them off better.

When the Nolan Ryan coins came out in July of 1990 celebrating his 300th career victory I of course had to make sure he had some of these coins. These three coins are sealed, numbered, and are .999 Troy Silver Ounce.  At the time I bought the coins our son was just 7 years old.

I ran across some of the baseball cards he collected, the coins we had bought, the postmarks the post office was doing at the time, and decided to take a few pics of it all.

I honestly need to give this stuff to him I have had it put up in a safe place for many years. Maybe I can make a collage in a shadow box for him to keep.

These pics are just a few of my collections from the past. I am sure to a collector these would be worth some money. 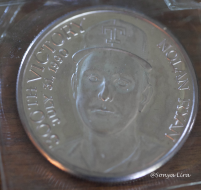 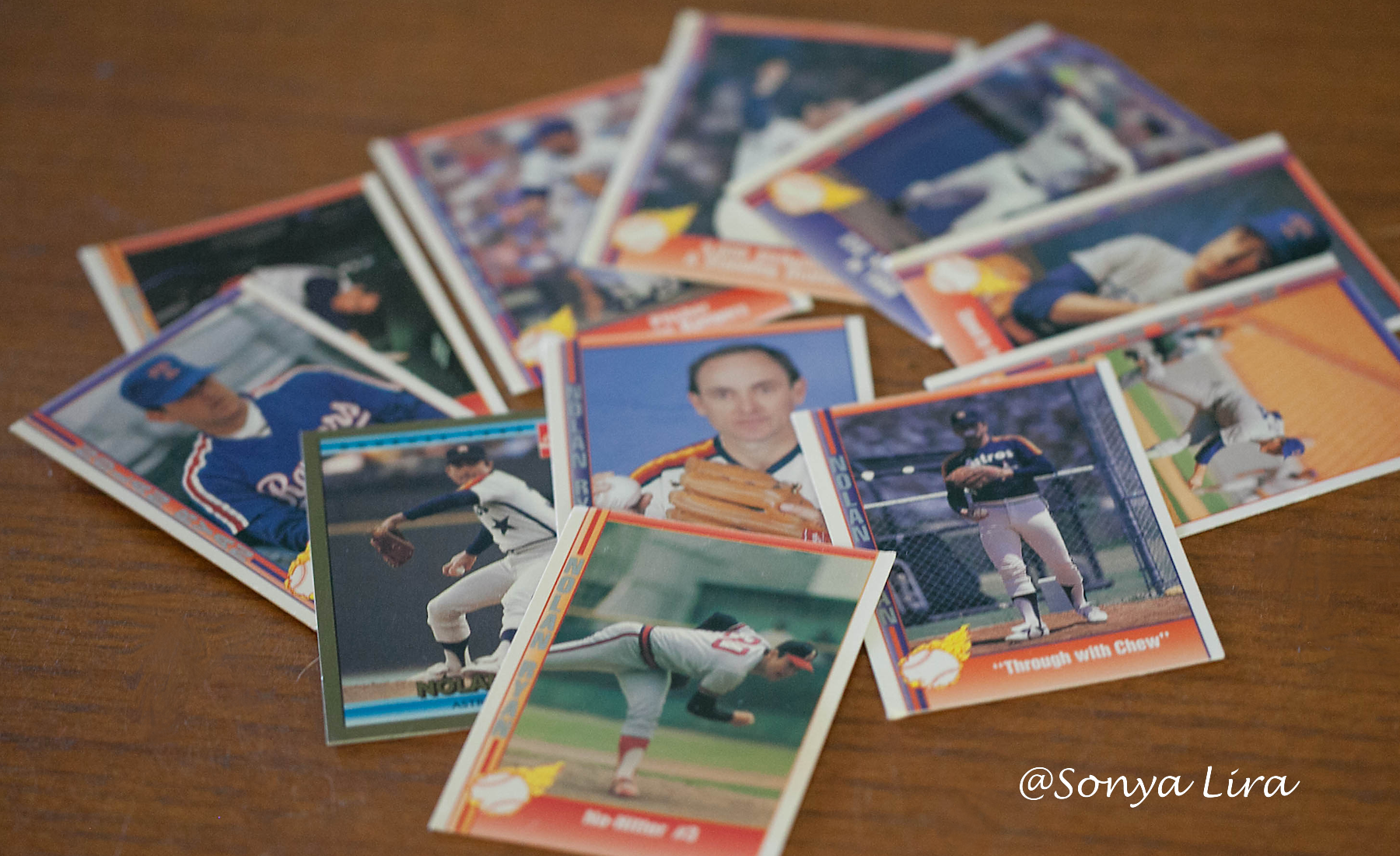 These Crepe Myrtles always remind me of pink cotton candy.

The trees turn bright pink and they bloom for about 1 1/2 months.

We have 13 scattered among the two acres. They are pink, white, red and purple. The red one has dark purple leaves on the tree. We did not plant all of these the birds planted some of them.

Surround yourself with beautiful flowers and your life will be much brighter.

Last year I found these flowers on clearance at Lowes.

They never died back but instead grew bigger and better.

The tag was not on the pot at the time but I think they are in the Sage family.

Clearance plants can always give you a good bang for your buck. These were 1.00 and I bought three pots of them.

Splashes of purple in the landscape add color and beauty for the eyes to see.

I am still taking pics of these huge ivy leaves they are so amazing looking.

The one with the penny on it is roughly 9″ across. It was a shiny leaf all the new leaves are very shiny.

This plant is continually making new XL leaves that seem to keep getting bigger and bigger I love it. Hopefully, I can protect some of them over the winter.

Who knew an ordinary ivy plant could produce these leaves with a little help from a bog with a pond that has goldfish and koi.

Life is full of surprises and if you are lucky you will get to witness some of them. 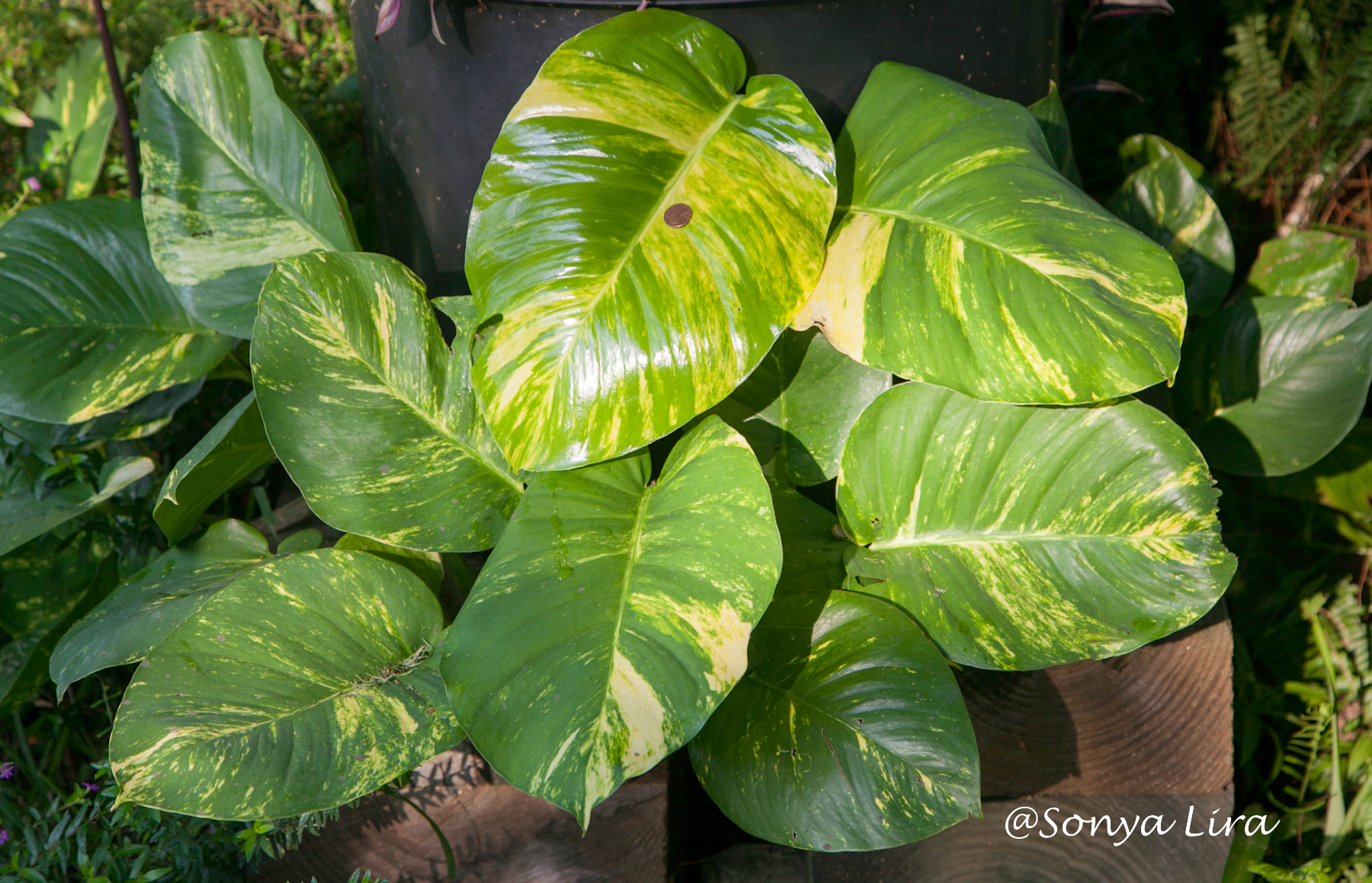