We had over 30″ of rain over the course of a few days from Harvey.

It never even came close to coming in our house. When we built many years ago my father n law told us to put a 2-foot slab and we did and built the land up. Everything drained really well around here.

Some roads in our area were not passable. The stores are closed but some are supposed to reopen today.

Our daughter’s house got water in the mud room. detached garage, carport, and apartment. Not in the actual house. All the animals are doing okay just a little stressed from being cooped up when they are used to roaming. The water is going down it just takes a long time when this much has fallen. We figure they got about 36″.

Things are materialistic and can be replaced. Human Life is the most important thing and our family is blessed everyone is safe and okay.

Houston we have a sunrise. Normally we take our sunrises for granted but when you have not seen once since last Friday morning it is the most beautiful thing you have ever seen.

Thank you for your thoughts and prayers.

Well, today is Sunday Harvey made landfall on Friday evening and were still seeing the effects from it.

Here at our house in Manvel, Texas in Brazoria County over the last few days our rain totals are at 13″+ our rain gauge was over flowing this morning so who knows it was probably more.

Our daughter’s house is more like 18″. They have moved animals several times first the barn flooded, then the carport flooded, then the garage flooded.  Even her school room flooded. So far the house is high and dry but their yard the entire 4 acres looks like a lake with the house on a small island.

The goats hate the water and so do the chickens. Their dogs hate the bad weather.

Our daughter, her husband,  the kids, and all the animals will probably end up at our house. We can put all the animals on the back porch and they will all be high and dry.

We are staying put and not trying to leave there is no point since our water is draining just fine. I would rather be in our house if the water gets really high than stuck on a road in a car.

The best thing any of us can do is try to remain calm, stay positive and pray for the best.

Hang in there Texas hopefully, this ends soon.

For the most part, in our part of Brazoria County, we ended up with some rain about  5 3/4″ so far. They say more rain to come over the next 4 – 5 days. If it happens like this and is spread out the flooding won’t be as bad.

The wind has been pretty strong over night I would say gusting to 30 – 35 mph.

Our daughter lives about 15 minutes from us but closer to the coastal area and they were pounded overnight with winds and rain. It looks like 7 – 9 inches fell in that area according to the news.

We are waiting for daylight to see how our place looks.

There have been several tornadoes nearby but not here than we know of.

My husband spent 2 evenings trying to get out the generator to run and it would not make a spark.I spent two days on the phone and going store to store trying to find one to buy and everywhere they were sold out.

We have the most wonderful son in law David his dad had a extra generator he had gotten started so our son in law brought it here yesterday for us to have one in case we needed it.

I will update as the day goes on. We have not lost power yet.

We live near the Texas Gulf Coast between Houston and Galveston.

Hurricane Harvey is supposed to go in near Corpus Christi which would put us on the dirty side of the storm that gets all the rain. They say our area could get 21 – 28 inches of rain. Now the storm could change its mind at the last minute and not go in there they have been known to do this before. You never really know until it happens.

Right now the Gulf waters are very warm and these storms love that it allows them to increase in power. They are expecting Harvey to make it to a class 3 hurricane.

I am schelduling this post in case we lose power in the past we have been without power during hurricanes for over two weeks.

We have a generator we run for necessities and the computer is not one of those. I can access some with my phone unless the cell towers go down that too has happened in the past.

We have a really good Governor Greg Abbott he has preemptively declared a state of Disaster for 30 Texas counties and ours is one of those. We live in Brazoria County. By him doing this ahead of time it means our state would get help sooner than later.

A great big thank you to Greg Abbott.

I will post as soon as I can please keep Texas in your prayers.

I had read that ducks love watermelon rind so I had been putting some out for the ducks and other wildlife.

The other day I noticed about 4 butterflies on the old rind I am guessing they are drinking the juice.

We have had some watermelons we picked that looked good but they were not very sweet. Instead of just throwing them away we share with the wildlife.

Give it a try and see if you can get a few butterflies feeding on your watermelon.

This dog along with another was apparently dumped near our daughter’s house.

Our daughter put their pictures on next door a neighborhood site but no one came forward. The male was a mixed breed and the female was a lab.

She loves to swim and our daughter has a pond. This dog swims underwater and is under for like 15 seconds and you can not see her at all and then she pops back up again and starts dog paddling.

After a couple of days, she was able to catch the female and bring her to our house since we have a fenced-in back yard.

I thought that Andrew named her Shadow but out daughter said no that was his chicken. I guess I called her Shadow lol.

Daisy was so excited to have a friend to play fetch with now she is quite sad because Shadow left last night.

We figure this lab is about 1 – 1 1/2 years old and she appears to be in good health. She has been trained she does not bark but most hunting dogs do not bark, she sits, stays, lays down and plays fetch bringing a ball, stick, or even a log she drops them at your feet.

Daisy had an old collar that fit her perfectly.

I can not stress enough to everyone with pets to get them a tag with their name and your phone number on it that attaches to their collars. That way if your pet is lost you can be reunited.

As far as people dumping animals it makes me sick because animals depend on us for food, water, and shelter. When you dump them they have to survive on their own or by the kindness of strangers.

This dog stole our daughter’s heart and then she stole mine. We both wanted to keep her. The only thing stopping me from keeping her was she would not stay out of the koi pond.

Our oldest daughter was coming into town and had actually found her a home. She was going to be taking her back to Dallas. That was until she met her and fell in love with her just like we did so now Shadow will be living with her.

Of course, I had to do a photo session.

One look in a dog’s eyes and you can see through to its soul and connect with it.

Shadow’s spirit and personality are great and when everyone is falling in love with the same dog you know that dog has something special to offer.

I have planted the first seeds in the rockwool that are for the inside plants.

This time of year it is so hot for lettuce, spinach, cabbage and swiss chard but if you grow them indoors hydroponically it is a win win situation. Those are the seeds I just planted.

I have ordered many supplies for the big greenhouse outside we are waiting for the plastic to arrive. The kind I ordered is 10 mil. woven clear plastic it has a longer life span than the regular clear in fact I think it is 7 years compared to 4.

We are also doing shade cloth since Texas is so hot it will allow for better ventilation. The shade cloth will go first then the woven plastic and we can raise the plastic up and open the screen doors to ventilate the greenhouse.

We will be doing several types of hydroponics the dutch buckets and the Kratky method are two and we may even do a third.

I have to get a load of sand delivered and then the pond liner that is 22 mil. will go over that because this hydroponic set up is a sterile environment there will be no dirt inside of this greenhouse. Only water, buckets, container, plants grown from seeds, and nutrients.

I will post pictures as things start happening hopefully in the next few weeks.

If you remember there were two black bellied whistling ducks that frequented our bird feeders they were coming every day a few times a day for the last few months.

We decided to build them a nesting box. Their boxes have to be pretty big because they are bigger than the average bird.

I guess they told all their friends where there was a free meal because we have had as many as eleven ducks at a time. They show up around 7 – 7:30 a.m. stay about 1 1/2 hours then they leave.

In the evening, they come back again mainly to rest in the shade but they do some eating too.

I had to grab a picture of them on the arbor above the walk through. As you can see one is in the feeder eating. Most of the time there will be two in each feeder and they take turns with the ones who are waiting.

At this point, we are looking at adding more feeders because when they are eating the little birds do not get to eat. 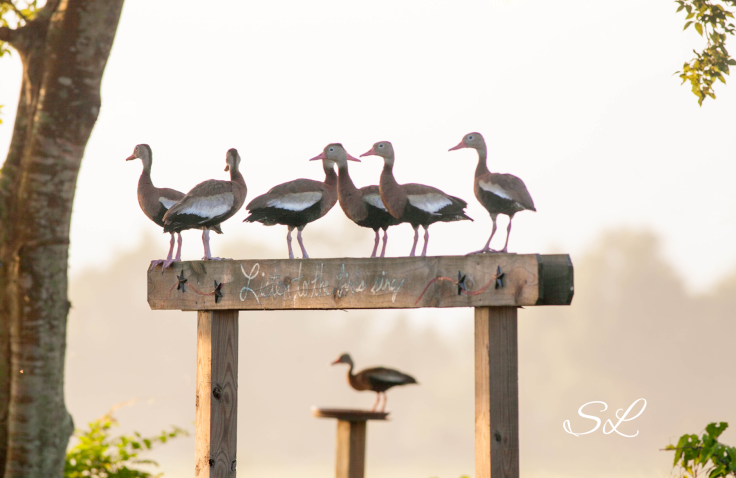 We have always had cardinals in our yard but this year we have a lot.
There are so many juveniles going through so many different stages you have to laugh about it.

The males especially seem to get the worst of it and tend to look so awkward during this stage.
In the pictures, below the males are in the first two pics you can tell their feathers are changing colors so they have two colors of feathers right now.

The females are the last two pictures but all these birds are juveniles.

I saw this little green hummingbird aiming for the flower and I was able to get 3 shots in a row of his action. 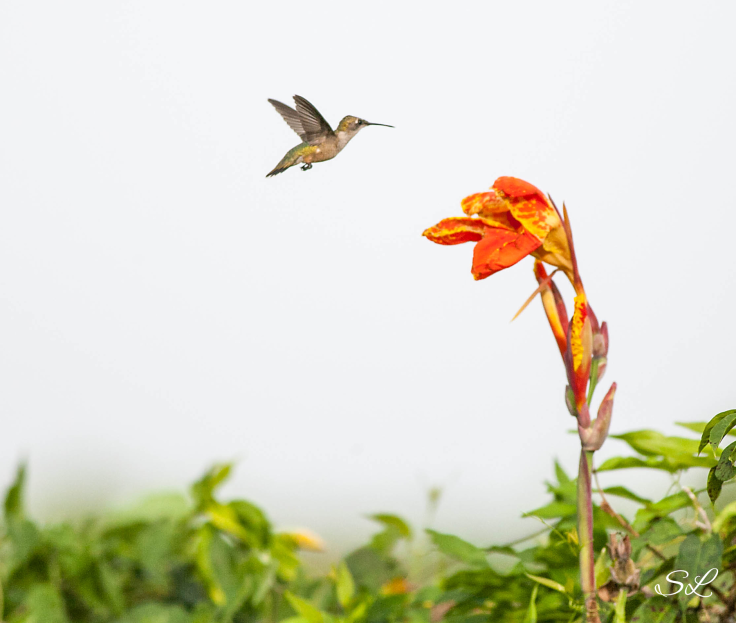 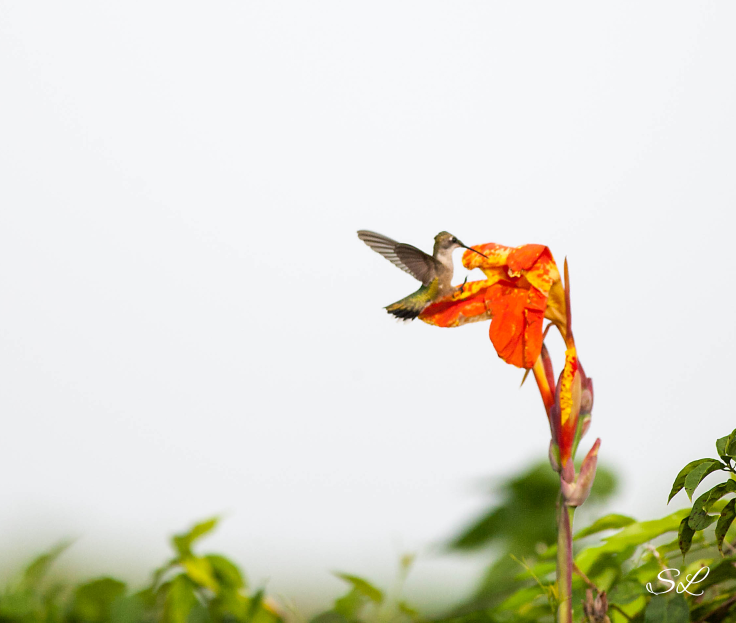